Post-tour to Noormarkku and Paimio Sanatorium

The post-tour is organised on 14th of September. The tour introduces the most significant attractions of Alvar Aalto in Western Finland. The tour starts by bus from the main entrance of Rauma town hall at 9am. We will arrive in Noormarkku (North-East district of the City of Pori) at 10.30.

In Noormarkku we will visit Villa Mairea and Makkarakoski sawmill buildings.

“Villa Mairea was built in 1939 as a modern residence for Maire and Harry Gullichsen, who were ardent lovers and promoters of art. Progressive and unprejudiced, they were interested in modernist abstract art and utopian ideology. The designers of their home, the like-minded architects Aino and Alvar Aalto, were given free hands and an opportunity for unrestricted experimentation.” (www.villamairea.fi/en)

“The Makkarakoski sawmill at the heart of Noormarkku Works was converted into a museum in 2014. At the sawmill, you can take a look at the entire life cycle of the sawmill as, initially, it was run by hydropower, them by steam and, finally, by electric power. The International Committee for the Conservation of the Industrial Heritage granted Ahlström an industrial heritage award in 2015 for the establishment of the Makkarakoski sawmill museum and the Ahlström Voyage exhibition.” (www.ahlstrominruukit.fi/en/noormarkku/culture/makkarakoski-sawmill)

After the guided tours it is time to enjoy lunch in Noormarkku Club. After the lunch, we will continue the bus journey towards Paimio. During the bus ride, the director of Alvar Aalto Foundation Tommi Lindh tells us about the process of nominating buildings designed by Alvar Aalto on the World Heritage list. We will arrive in Paimio approximately at 16.30. In Paimio we will explore the Sanatorium designed by Alvar Aalto.

“In autumn 1928 the committee in charge of building Paimio Sanatorium (the Tuberculosis Sanatorium of Southwest Finland), issued the following announcement: “Esteemed Architects are invited to participate in a competition for drawing up the designs for said sanatorium with 184 sick beds”. Alvar Aalto won the open competition and the construction project began soon after the result had been announced. The Paimio Sanatorium (1928-1933) has been canonized as an internationally recognized masterpiece of modern architecture, and it is often considered to be the breakthrough of Alvar Aalto.” (paimiosanatorium.fi/en) 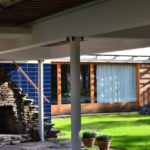 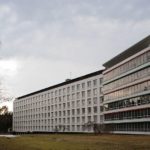