Anna Eriksson: M – The Rituals of a Lonely Bitch 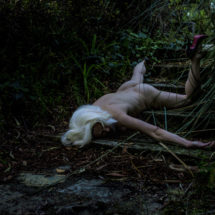 Artist Anna Eriksson (born in 1977, Rauma) drew attention with her first film M in 2018. The film was nominated at the Venice Film Festival, after which it has won awards in Europe and the United States. Eriksson was responsible for the direction, script and the sound design of the film. She also played the provocative leading role herself.

M is the protagonist of the film, but also a reflection of Eriksson’s subconsciousness and a challenge that has helped her to slough off her skin. M is a character that hovers between reality and fiction, a tedious bitch that Eriksson channels with visual experimentations, autosuggestion, performance and the iconography of popular culture.

“M – The Rituals of a Lonely Bitch” is Anna Eriksson’s first exhibition. It continues Eriksson’s artistic work around the themes of sexuality and death and presents Eriksson’s creative process as personal, raw and bare. The movie inspired by Marilyn Monroe has already faded to the background. This is about the woman called M, and her grotesque, self-ironic and tragic world.

The exhibition consists of five new video artworks and a photograph installation. The other curator of the exhibition is Matti Pyykkö, who works as Eriksson’s cameraman.

The exhibition contains intense picture and sound material. It is not recommended for sensitive viewers or underage people without adult supervision.