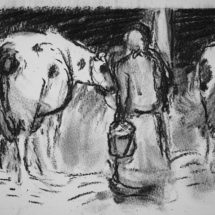 Hanneriina Moisseinen (born in 1978, Joensuu), a graphic novel artist who participated in the Suistamo laboratory of tradition, will showcase a graphic novel installation that is made up of the originals of the graphic novel Kannas (2016), which takes place during the summer of 1944 and the Continuation War. Kannas depicts a divergent period of time from divergent perspectives. Instead of the typical themes of graphic war novels, the imagery of popular culture and the themes of official historiography, i.e. fighting, heroism, manly persistence and suffering, Moisseinen focuses on the mutual caring between people and animals and survival during the war. Musician and composer Eero Grundström (born in 1976, Rauma) has created a soundtrack for the exhibition, which can be listened to in the exhibition space as part of the artwork. Hanneriina Moisseinen is a graphic novel artist with a background in visual arts, and she has been awarded the state prize for graphic novel art in 2016.